How you grip the basketball is critical to a consistent release.

There are so many details that go into holding the ball and using each of the hands in order to become a great shooter.

If you can get consistently close to an optimal grip and release, then you stand an excellent chance of developing repeatable form.

Use these details to start to develop your own system of drills to isolate the habits, and layer drills.  Or skip to the front of the line and get my my proven system of drills in my SHOT DEVELOPMENT SYSTEM – PURE RELEASE.

THE GOAL OF THE HANDS

As I’ve mentioned in other posts, our goal when we shoot is to create as much Positive Power in the shooting motion as possible. Positive power is any energy that is straight up and in line with the hoop. 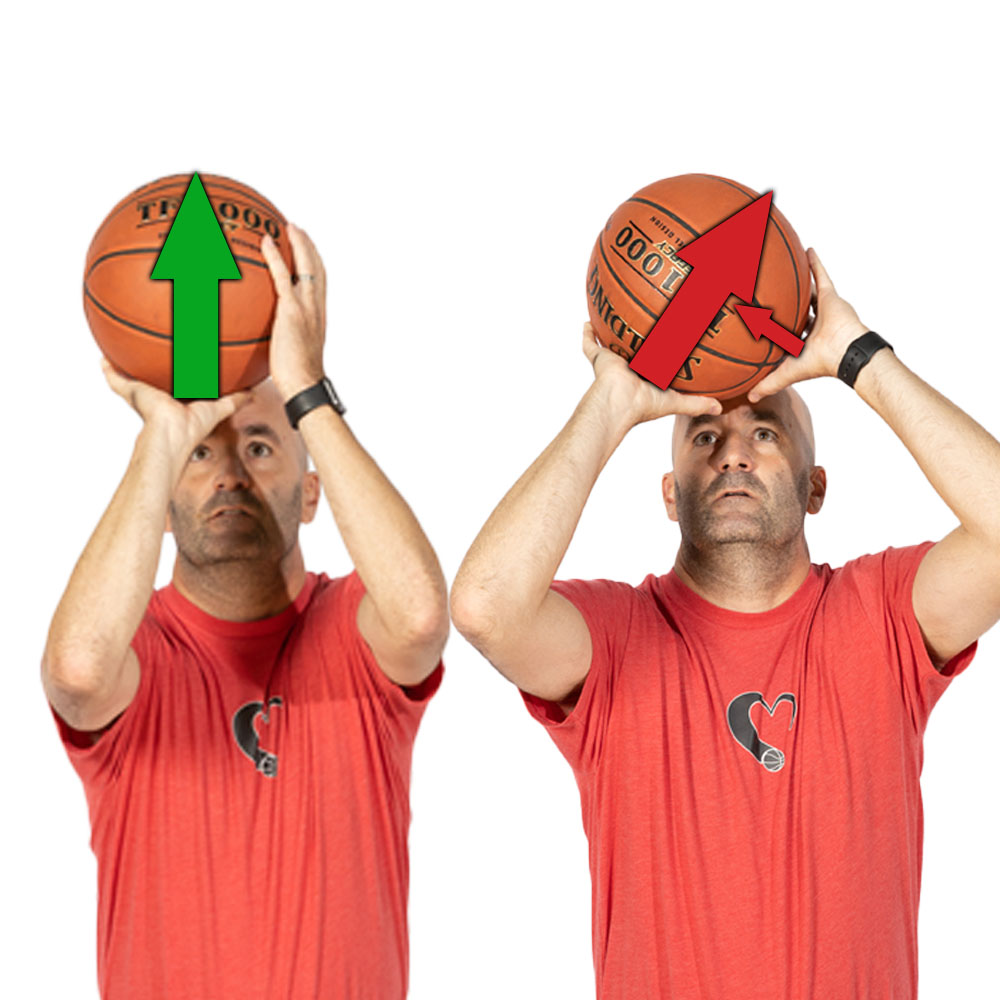 Since it is your hands that are actually TOUCHING the basketball, it is going to be critical that we create as much positive power with our hands as we possibly can.

Instead, try to build a one-handed release with one hand pushing the ball towards the target.

Need help creating positive power but have no idea how to do it?   Want to build a true one-handed release?  CLICK HERE TO GET MY SHOT DEVELOPMENT SYSTEM – PURE RELEASE.

START BY MEASURING YOUR HAND 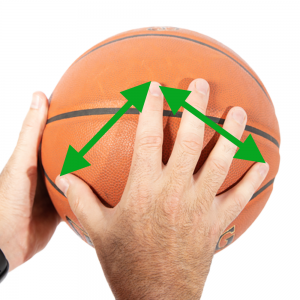 This is one of the key building blocks that so many people miss.  They build their shot around assumptions, or theory, but not their actual body. 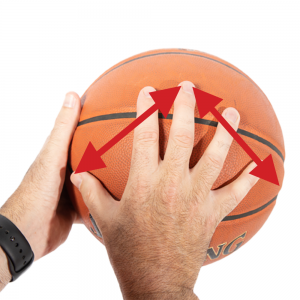 I’ve never had anyone grip the ball correctly and find that the middle of their grip is the middle finger.  If you do, make sure that the thumb is spread out wide.  If the thumb isn’t wide, your hand won’t be as big as it could be, and won’t control the ball as well as it could.

Need help isolating this important skill, then learning to apply it into games?   Click here for my SHOT DEVELOPMENT SYSTEM – PURE RELEASE and get all the drills you need to build the habit!!

MIDDLE OF THE HAND UNDER THE CENTER OF THE BALL 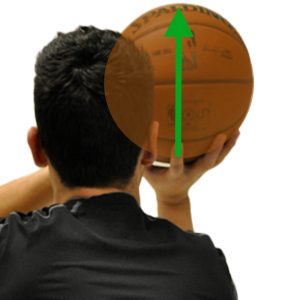 Need some drills for getting your shooting hand under the ball?  Then need to learn how to layer drills so you can apply the habit at game speed?  GET MY SHOT DEVELOPMENT SYSTEM – PURE RELEASE.

This is one of the most overlooked keys to shooting.  The angle of the finger on the middle of the ball. 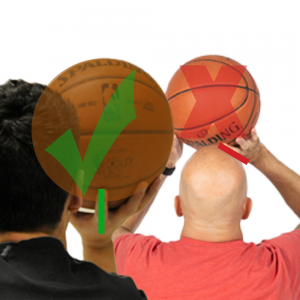 Coaches tend to refer to getting the “elbow in” without realizing why it matters.  But let me say this first – the position of the ELBOW doesn’t really matter, the elbow isn’t touching the basketball.  We can, however, use the elbow as a cue to get the finger into correct alignment.  So saying “elbow in” isn’t WRONG, it just doesn’t fully cover the issue.

Do you have a tendency to push the ball off line on your release?   Click here to start building a Pure Release.

GUIDE HAND COMING OFF THE BALL AT THE SET POINT

Once the shooting hand is in the correct position, we can focus on getting the guide hand off the ball.

The guide hand needs to support the ball until the shooting hand can fully get underneath the ball and support it by itself.  That occurs around the set point.  And that is when the guide hand should start to come off the basketball, though it might not actually release from the ball until a fraction of a second later.

Does your guide hand push the ball off line?  Need a progression of drills to help with this?  MY SHOT DEVELOPMENT SYSTEM WILL TEACH YOU ALL THE DRILLS I DO WITH MY PRO PLAYERS

GUIDE HAND ON THE SIDE OF THE BALL

The positioning of the guide hand on the ball will play a large role in how easily or how well it can come off the ball.

Keep this in mind… it is POSSIBLE to get the guide hand off the ball or even make shots from ANY hand position.  But our goal is to make the movement as simple as possible, because SIMPLE IS REPEATABLE.

So our goal is to find the most simple position that the hand can assist in the lifting motion, but not interfere in the shooting motion.  I encourage players to hold the ball so that the guide hand is on the very side of the basketball with the fingers pointed at the ceiling when the ball is at the set point.  From that position, all the guide hand has to do it come off the ball a fraction of an inch, and it is out of the way and passive in the shooting motion.

Now, it may be necessary at times to catch the ball with a larger separation in the hands because a catch was challenging and needed to be more secure.  But understand that makes the SHOT slightly more challenging.  We can work on the skill of catching the ball better, but there will always be some variability in the hand position on catches just because catching and shooting are two different skills, with two different ideal hand positions.  Continue to work on the habit of simplifying your hand position, not intentionally making it more difficult.

Need help getting your guide hand off the ball cleanly?  CLICK HERE TO GET THE HELP YOU NEED TO MAKE MORE SHOTS.

WHY DOES IT LOOK LIKE SO MANY PEOPLE SHOOT OFF THEIR MIDDLE FINGER?

This is a common question and requires a deeper understanding of shooting form.

In order to simplify the shooting motion as much as possible, I’d like a player to get the middle finger under the middle of the ball at the set point, then lift the ball straight up in the air so that both sides are being lifted evenly, and then releasing off the finger that is the middle of their hand.

But many players appear to release the ball off their middle finger?  Why?

The shooting motion is short and violent.  The wrist is snapping quickly and there is a lot of variability in how the ball leaves a players hand from shot to shot.  Even two swishes can come off a great shooter’s hand differently.

This is why I concern myself far more with the position of a player’s hand at the set point, rather than the release.

This happens all the time, but that small rotation is something we want to try to either minimize or eliminate from the shooting motion.

Have you struggled to be able to do this in games?  It might be because you never layered drills so that you could APPLY what you were learning.  Finally break the habit once and for all with my SHOT DEVELOPMENT SYSTEM – PURE RELEASE.

HOW DO I BUILD THESE HABITS WITH MY NBA CLIENTS?

Building habits in the grip and release requires attention to detail and patience.

I focus on isolating the habit that needs work.  In many cases, this can look like standing close to the rim, taking as much time as needed on each shot, and holding the correct position for a couple of seconds before shooting.

From there, as a player gets better at the new, isolated skill, I will start to layer in other drills to make the situation more like a game.  The more their habits progress, the more layers I add.

It is a process that takes a lot of experience, so it is difficult for me to explain in a single blog post.

That is why I created my Shot Development System “Pure Release”.  All the drills that I use with my NBA players, laid out in order in video form.  Stop guessing what to work on.  Start getting results.

You can get “Pure Release” by CLICKING HERE. 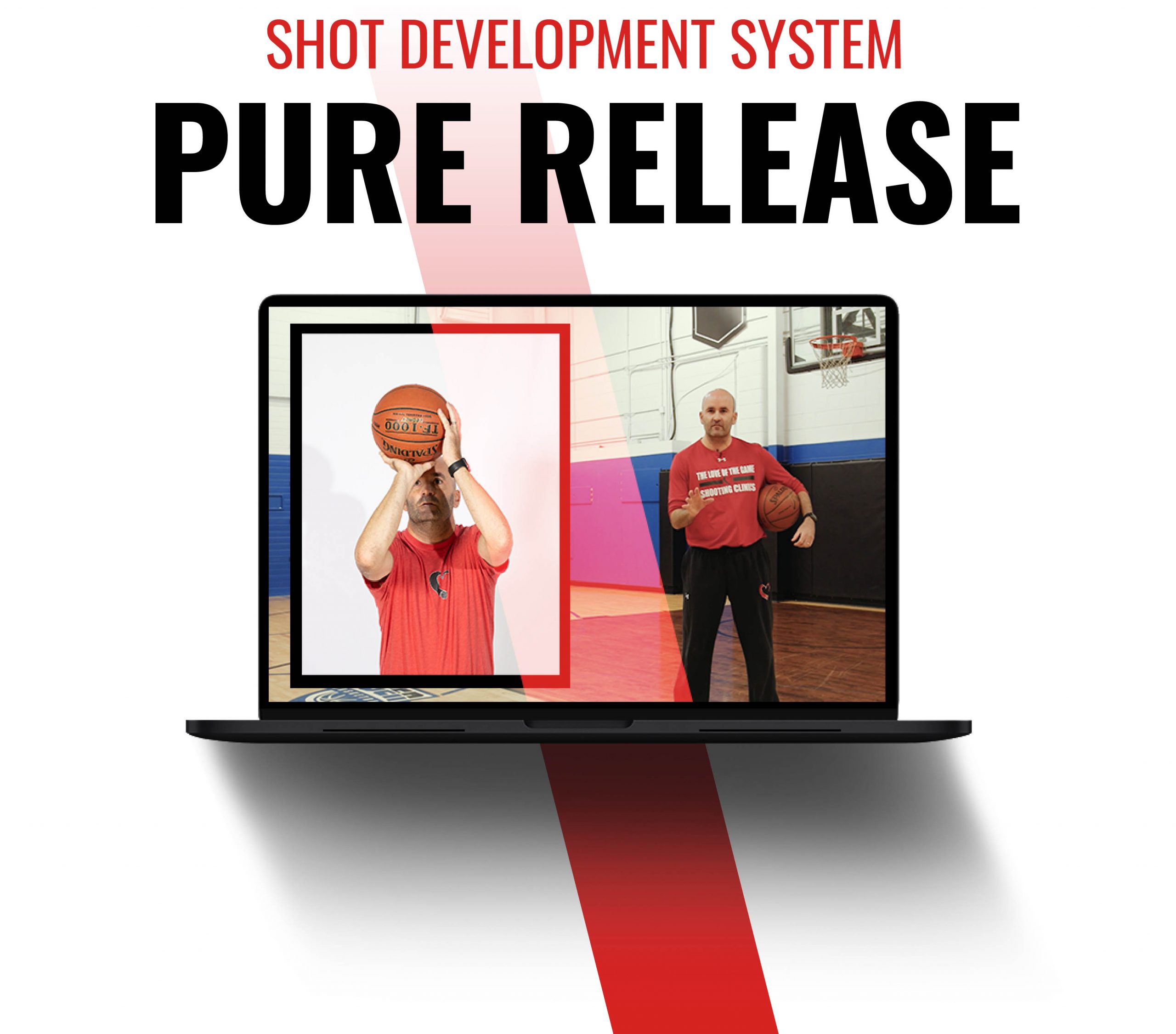 Learn the progressions I use.
Start making more shots now.