The Perfect Footwork for Shooting

The Perfect Footwork for Shooting

There are two fundamental truths about footwork:

And while I believe they are worthwhile conversations to have, I think we get too hung up on the answers…

The game isn’t black and white, right and wrong.  The game is made up of grey areas.

We can debate the benefits of each all day.  Some people say the Hop is faster to get into the shot, some say the 1-2 step is more natural.

Regardless of the footwork used, I want to make sure of two things…

Remember, this is not a judged sport.  We don’t get extra points for doing things a certain way.

I always try to ask players what they are most comfortable with for footwork.  If they have time (an open shot), I don’t care what footwork they use.  I want the ball to go in the basket.  And if them using a certain footwork increases the likelihood of that shot going in, and they can get it off in the time they have, I’m all for it.

But at the same time, the player should know what is the most efficient footwork in different situations and make sure players have a base level of comfort with those.

WHAT SHOULD WE BE FOCUSING ON?

Sometimes we get so focused on the lead up to the shot that we ignore WHAT WE REALLY NEED TO ACCOMPLISH.

My biggest goals with foot position and footwork are:

Do you find yourself leaning or fading on many of your shots? Need help with generating more positive energy? Click here to learn how

WHAT ARE THE KEY TEACHING POINTS?

There are two main things I focus on in these situations

Most coaches talk about feet being “shoulder width” apart when a player shoots, but we need to define this more precisely.  I make a slight change and talk about “hip width” apart (basically the same width) only because hips are easier for players to see than their shoulders.

I always try to get players to be able to fit their hips inside their shoes without touching the shoes if they sat down.  Having the outsides of a players feet being hip width apart just won’t be stable enough when they start creating the amounts of energy that are created in games.

Once the negative energy of the cut is stopped, the goal becomes to create as much positive energy as possible in the shooting motion.

Players do this by pushing evenly with both legs and we can get a good indicator of whether a player does this well by watching their feet at the end of the shot.

If they land on one foot before the other, or they land with more weight on one foot, chances are they didn’t push evenly with their legs.

Feet facing the sidelines after you shoot? Need some drills on how to push off more evenly with both legs? Click here to start building better balance habits

Once we know the goals for our legs, we can focus on the footwork.

My goal with the footwork leading up to a shot is to be efficient and to give options.  Therefore, there is rarely ONE set of footwork that I apply ALL the time, even in just one situation.

If a player is open for a perimeter catch and shoot, I don’t believe there is a “right” way to set your feet.  Whether the player hops or takes a 1-2 step isn’t my concern as long as their feet are set on the catch and they can push evenly with their legs.

On a curl cut off a pin down, I might prefer that a player forward pivot on the inside foot, rather than hopping and stopping all momentum before making their read. Converse to this, when a player is in the corner, I might prefer a hop because often a player using a 1-2 step will step out of bounds on what would have been a wide open three.

But these answers are rarely cut and dry, so I avoid cut and dry rules.  Instead, I focus more on the outcome I want to create.  Stability.

Do you think your footwork is leading to you missing shots?  Click now to start getting more stable.

Even if you believe there is ONE correct formwork in a certain situation, make sure you get players some reps in a variety of different footwork.

We do this for two reasons.  First, the game is dynamic.  Even if we want to do things a certain way, sometimes the defender is going to win the battle.  And even in those situations we need to have some experience.

Secondly, players are going to go on to play for other coaches that might have other expectations.  So while one part of our job is to get results and have success now, the other part is to DEVELOP players to compete at the next level.

It will never hurt a player to have more tools in their tool belt.

How do I build habits in the feet?

How a players uses their feet is literally the foundation of their shot.  If they can’t use them well, everything else becomes harder.

That is why I put together my SHOT DEVELOPMENT SYSTEM “Consistency and Balance”.

In this system, I clearly identify the physical habits that lead to great, simple, balanced shooting mechanics.  Then through a series of over 60 short videos I clearly explain all the drills, tips, and progressions I want players doing to develop those habits.

No guess work.  I’ll show you exactly what I do with my NBA Clients.  All the drills are in order, fully explained, in video form!

PrevPreviousWhat should players of different ages work on?
NextThe Things Every Shooter Needs To DoNext 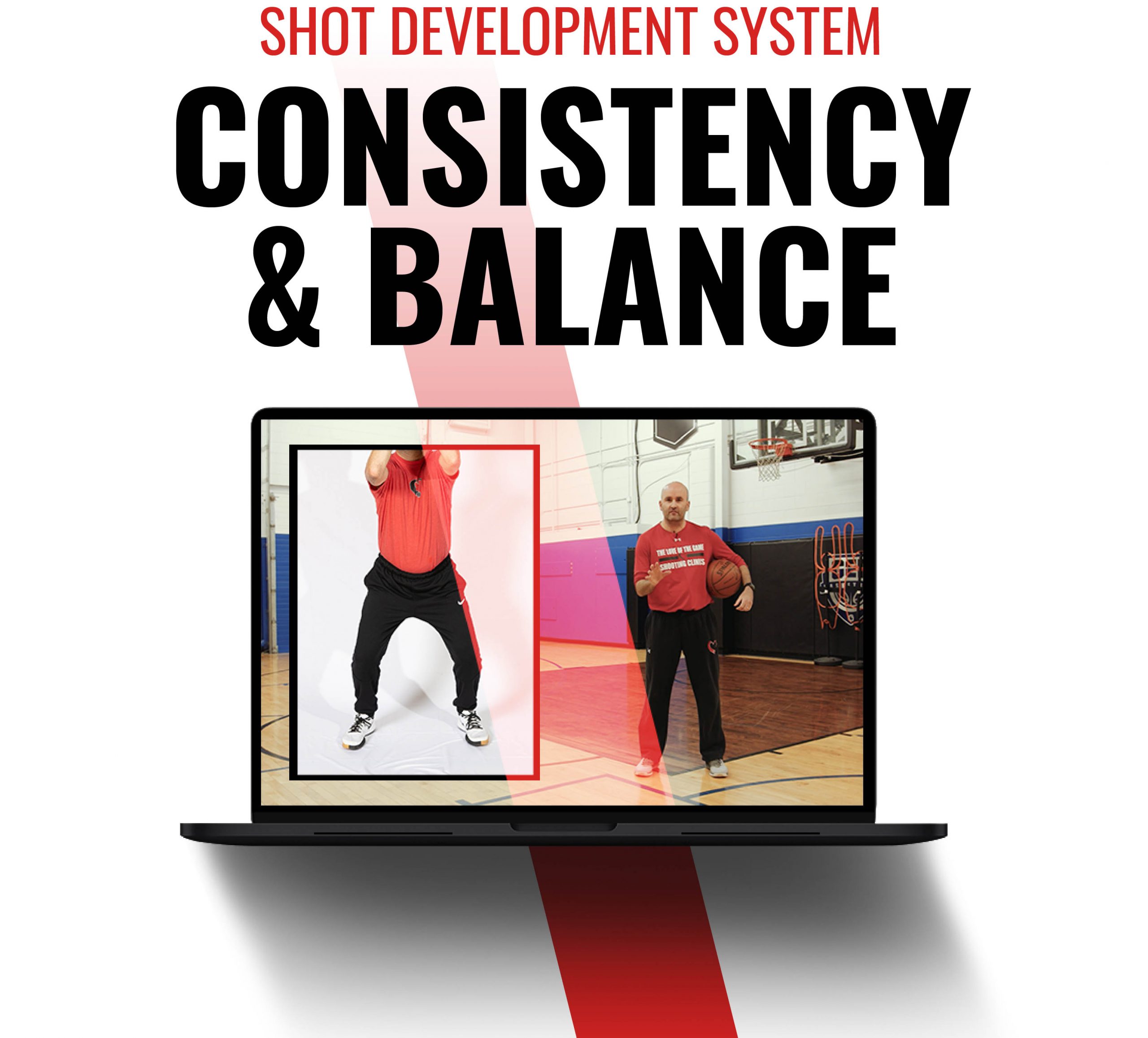 Get the system NBA players use.
Improve your consistency here!