There are an infinite number of different ways to shoot it, and even shoot the ball well, but if you look you start to see that most shots styles fit into a small number of categories.

I’m going to try to tackle some of the biggest shooting habits, and show you where to start in correcting those habits.

And if you still aren’t sure what might be holding your shot back, you can get me to do a detailed breakdown of your shooting form by CLICKING HERE AND GETTING A VIDEO SHOT ANALYSIS.

Taking the set point of your shot back over or behind your head is a common habit, especially among male players.  They usually either misunderstand advice about a high release point, or think this is a good way to avoid blocked shots. 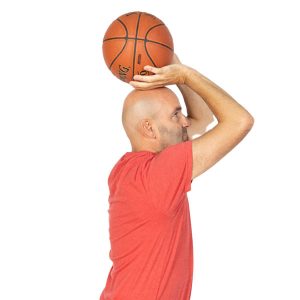 In reality, all that happens when the ball gets back over top of the head is players either develop flat shots, or struggle with their distance control.

The issue becomes with the elbow.  At the set point, a player hasn’t really started the shooting motion yet.  They have just been lifting the ball in a position to get their hand under the ball.  But if the set point is over the players head, the elbow will already be lifted.  And so as they begin the actual shooting motion, there is no where for the elbow to go.

For a player to release the ball with arc, they must release it early in the shooting motion, which causes a host of other problems.  If they are slightly late with their release, the shot runs the risk of being flat.  And because there is such a discrepancy players end up struggling to control their distance.  They release early, ball goes too high, comes up short.  Release late, and the ball flattens out, and potentially hits back rim.

Players need to identify a set point that is in front of their forehead, high enough to be able to get the shooting hand under the ball, but low enough that the elbow still has room to lift and generate force upwards.

If you struggle with this issue, CLICK HERE TO FINALLY FIX IT WITH MY SHOT DEVELOPMENT SYSTEM – FLUIDITY AND ARC.

Regardless of the reason, the fix is the same… but it is a little backwards from what most people do. 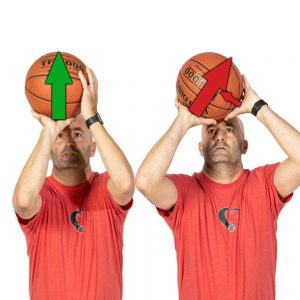 I can help you improve these habits.  CLICK HERE TO GET MY SHOT DEVELOPMENT SYSTEM – PURE RELEASE.

This can be hard for young players, so patience is needed.

Players need to learn to flow THROUGH a higher set point, but that doesn’t mean:

We need to DEVELOP the habit – and that may mean very slowly for young players.

Young players tend to have a set point down around their chest or chin, which make it almost impossible for them to get their shooting hand under the ball without dramatically twisting their body. 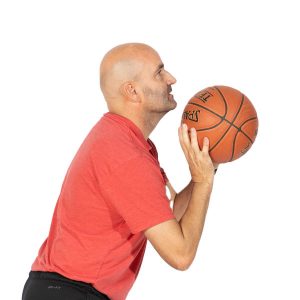 Their shooting hand is then forced to be on the back of the ball as they begin the shooting part of the motion, and the ball starts moving FORWARD.

In a lot of cases this happens in part because of lack of physical strength, and in part because of the player shooting from too far away.  They aren’t strong enough to get the ball to cover the distance AND get arc on the ball, so they sacrifice the arc.

Players need to move in, and learn to lift the ball up through a set point where they are able to get their hand UNDER the ball.

I can show you the drills and progressions I use for this habit in my SHOT DEVELOPMENT SYSTEM – FLUIDITY AND ARC.

ROTATE YOUR FEET OR FINISH ON ONE FOOT

Players need to be in control of their body throughout the shooting motion… at least as much as possible. 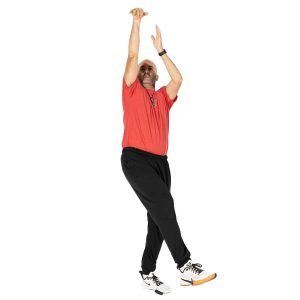 Sure, defenders will sometimes win the battle, or the situation will force a player to have to shoot a shot where they aren’t on balance, but players shouldn’t be consciously building habits that needlessly complicate shots.

If you watch a lot of young players, they finish shot when they are casually shooting with either rotated feet or on one foot.  This means they have created negative energy as they shoot – for no reason.  The situation didn’t call for it, and the defender didn’t force it.  The player just unconsciously practiced the habit of making an easy shot needlessly more complicated.

Most times, players just need to be taught why they need to focus more, and be held accountable to doing it more often.

On occasion poor balance is caused by body posture, or the position of the set point, in which case those issues will need to be addressed and isolated.

See how I build better habits with stability and posture in my SHOT DEVELOPMENT SYSTEM – CONSISTENCY AND BALANCE.

BALL UP NON-DOMINANT SIDE OF THE BODY

This has become a common habit with players.  A right handed shooter brings the ball up the left side of their body as they lift to the set point. 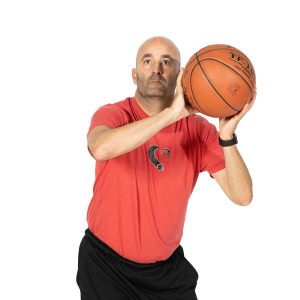 In extreme cases, the ball stays on the non-dominant side of the head, with the shooting arm crossing the body.

Players can’t allow the ball to be on their non-dominant side of the body at the set point.  If it is, it will be impossible to get the shooting hand underneath the middle of the ball and along the target line, which is one of my non-negotiables.

This doesn’t mean it is IMPOSSIBLE to make shots like this, it just means it is going to be REALLY DIFFICULT to be consistent.

Players in this position are forced to push with their guide hand (adding one big variable) and shoot across the ball (adding another variable).

Even if a player is cross eye dominant (left eye dominant, right handed shooter) I still discourage the ball crossing the body.

It is more important to me that the shooting hand get under the middle of the ball than the ball be aligned with the dominant eye.

If you need help improving this habit, pick up my SHOT DEVELOPMENT SYSTEM – PURE RELEASE.

I have a very specific definition of a hitch.

To me, a hitch is when the shooter’s body involuntary stops in the shooting motion.

This usually happens because the player’s body is so far out of position that it can feel the ball won’t go where they want it to go from the position they are in.  So their body stops and tries to quickly reorganize before starting again.

A pause at the set point is not a hitch in my mind.

A two motion shot (with a slight pause at the set point) is not WRONG, you just have to be strong enough to be able to do it (most youth players aren’t).

Players with a true hitch need to determine the point in their shot where their body pauses, and identify how they are out of position (this almost always happens either at the start of the shooting motion or the set point).

Then they need to isolate the habit, and begin to layer drills to improve it.

If you need help identifying the reason for your hitch, get my VIDEO SHOT ANALYSIS. 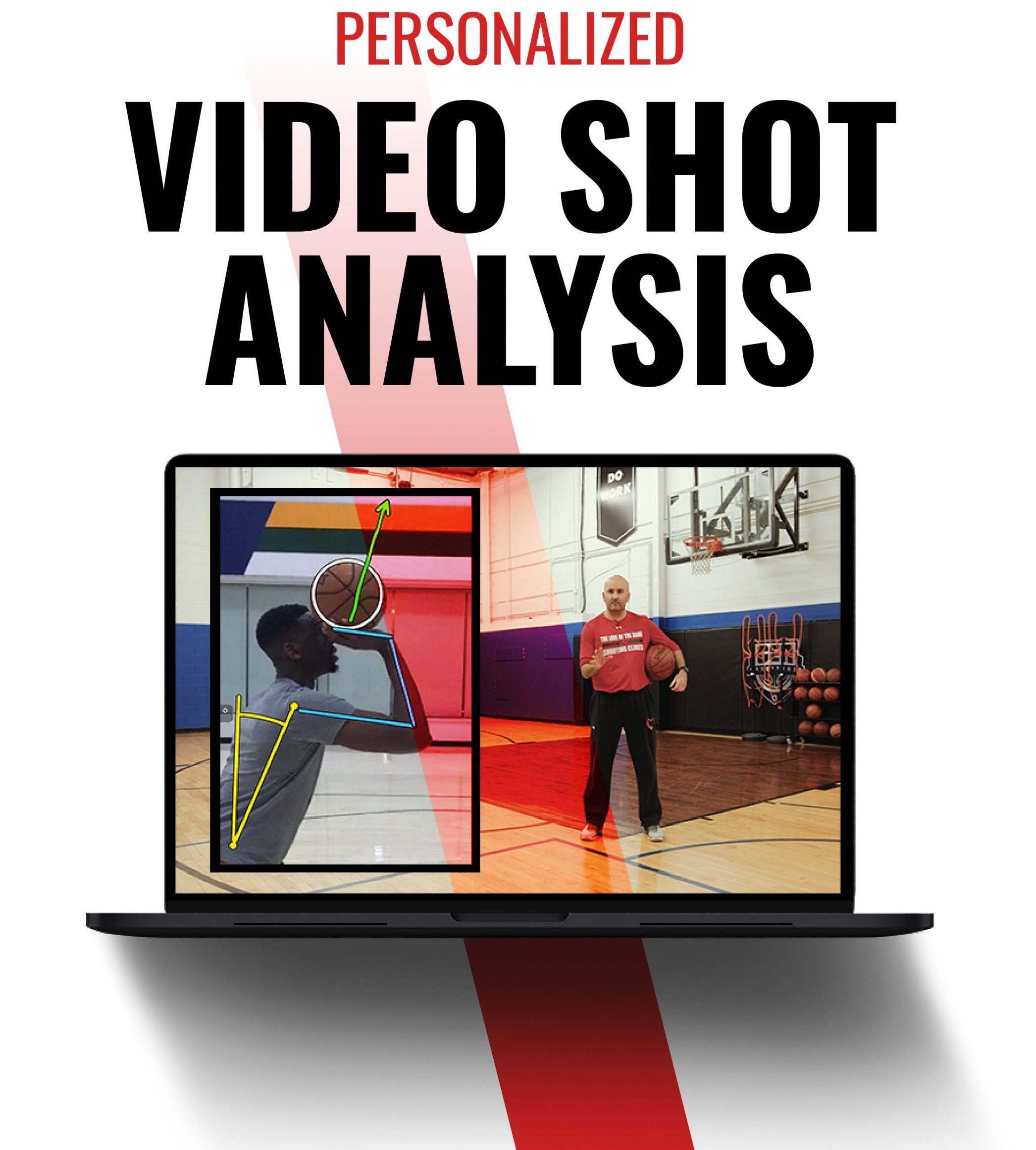 Need help identifying your flaw?
Get a Video Shot Analysis